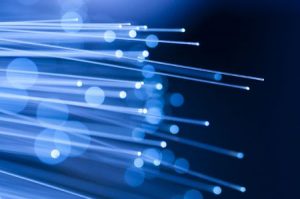 Fiber optics is the future of communication in this country, and for good reason. Fiber optic cables are currently being used to send voice messages, images, videos, and more at the speed of light. The fiber rods are made of glass or plastic and have the capability of sending data quicker and more effectively than the old metal wires that have been used to do the same thing for many years now. But when and where were fiber optics first invented?

The History of Fiber Optic Cables

The history of fiber optic cables actually dates back to the mid-1800s. While the cables themselves weren’t invented back then, the technology behind them was first researched when scientists and inventors like John Tyndall, Alexander Graham Bell, and William Wheeler started toying around with the idea of using the speed of light to transmit information. Over the next 100 years or so, other researchers continued to push forward with the idea of using light to send data before a group of Corning Glass researchers, including Robert Maurer, Donald Keck, and Peter Schultz, first invented fiber optic wires—then called “Optical Waveguide Fibers”—that could carry about 65,000 times more data than copper wires. It was a huge development.

The United States Government Was an Early Advocate

The U.S. government was one of the first big organizations to start using fiber optic cables when they utilized them to link a network of computers together in the NORAD headquarters in Colorado in 1975. Two years later, the first telephone communication system using fiber optic cables was created in Chicago. And fiber optics grew from there. By the end of the 1990s, about 80 percent of the globe’s long-distance data traffic was transmitted through fiber optic cables, according to ThoughtCo. What’s more, the first fully optic fiber cable was buried underneath the Pacific Ocean in 1996, paving the way for faster international data transmission. The fiber optics craze continues today with many companies using it to transmit data quickly both within their own walls and out in the world.

How Fiber Optics is Used Today

Today, fiber optics is used for a wide range of purposes and benefits a variety of industries, including but not limited to industrial, broadcast, medical, communications and military industries.

The Future of Fiber Optics

According to The Guardian, new technological developments in fiber optics could make it up to 100 times faster than it currently is. Wow! The advance is based on fibers detecting light that has been twisted in to a spiral. With more advances, the potential of fiber optics is near limitless.

Fiber optic markets will continue to grow as people continue value high speed internet and high bandwidth. From networks to helping industries improve their operations, the future of fiber optics is as bright as the sun.