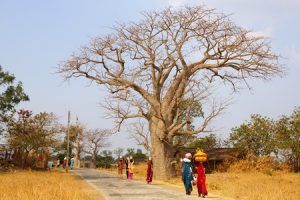 There is perhaps nowhere in the world where the digital divide is more pronounced than in India. Although the country is home to some of the fastest-growing tech companies in the world, there are also close to 900 million people living in India with no access to the Internet. Of the 4 billion people who lack Internet access worldwide, nearly one quarter of them live in India.

In the recently-formed Indian state of Telangana, however, government officials are undertaking a monumental effort to bring broadband internet to all 23 million people living in the region. Telangana was formed in 2014 when it seceded from a neighboring state after residents accused the government of systematic neglect. Now, the new government of the emerging state is taking concrete steps to improve the health and welfare of its citizens.

The plan to deploy broadband Internet throughout the region began in an effort to bring running water to the rural villages in Telangana. With utility crews already digging trenches to lay new water mains, the country’s minister of Information K.T. Rama Rao figured, “Why not lay fiber optic cable at the same time?”

And with that, the government-sponsored Telangana Fiber project was born.

By laying fiber optic cable and plumbing in the same trenches, Telangana will be able to save millions of dollars in labor expenses. The government hopes to further recover costs by leasing network bandwidth to private telecom companies. For people living in the rural communities of Telangana, access to the new high-speed fiber network will be downright life changing.

“I could easily get updates and alerts related to jobs and news as well as have a bright future, which would allow me to take good care of my mother and sister,” said 24 year old Ravinder Kethavath in an interview with Wired.

Currently, Kethavath has to ride his motorcycle 7 miles to log on to the Internet at the nearest cybercafé. With broadband access in his home, Kethavath will be able to browse job postings and reach out to employers every day, rather than just once a week on his trips to town.

Telangana’s government hopes to use the broadband network to improve the lives of its citizens in a number of other ways as well. The health department could use it to send immunization reminders to people in remote areas before mobile health clinics come to their villages, for example. In conjunction with the fiber deployment, government officials are launching a digital literacy campaign to teach people the basics of how to access and use the Internet. They also plan to provide routers to families who can’t afford to purchase one on their own.

In total, Telangana Fiber will lay more than 62,000 miles of fiber optic cable in more than 22,000 villages. If their project is successful, K.T. Rama Rao and his team hope to help replicate the process in other Indian states as well. Ultimately, they want to bring the Internet to all of India’s 1.3 billion citizens—an incredibly ambitious goal that could have a profoundly positive impact on some of the country’s most underserved communities.