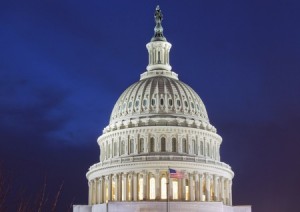 Under the guidance of its newly-appointed Chairman Ajit Pai, the FCC has pledged to accelerate broadband deployment and close the digital divide in rural America. Now, House Democrats have unveiled five bills that are designed to achieve these same goals, demonstrating that improved broadband access might be an issue both parties can get behind.

“Broadband offers more opportunities for more people—whether it’s getting a better education, applying for new jobs or training for a new career,” said Democratic Representative Frank Pallone of New Jersey in a statement.

One proposed bill, the Rural Wireless Act, would require the FCC to refine their data collection methods when determining where to invest in mobile broadband deployment. Another, the 21st Century Worker Opportunity Act, would give workers whose jobs are displaced by automation a credit toward broadband service to help them take part in distance learning opportunities and retrain for jobs in new careers. A third, related bill would offer grants for job retraining and partial debt forgiveness for recent grads who help with retraining efforts. The fourth bill would allow low-income students to access their parents’ Lifeline connection via a Wi-Fi connection for schoolwork. Finally, the fifth bill would make people living on tribal lands eligible for Lifeline support as well.

If approved, these bills could not only expand affordable high-speed Internet access in rural communities, but also help to prepare the American workforce for a new age of automation. With some analysts predicting that robots will take over 30 percent of the jobs in America within the next decade, it’s essential that we start retraining people for the future now.

It’s not clear how many, if any of these bills will be approved by Congress, but so far they’ve been well-received  by a number of legislators and  public interest groups. Hopefully, broadband access will continue to be one issue where partisan politics can be put aside for the good of America’s citizens.