It may seem like technology today is especially reliant on wireless data transmission – more and more locations offer free Wi-Fi to patrons and guests, and unlike the days of dial-up, your phone and computer don’t need to be physically connected to something in order to transmit data. Well, while it is true that we’re a world obsessed with wireless content, there’s simply no way the internet could function without the network of ocean-crossing cables that were laid many years ago to connect the continents.

Fiber optic cables on the ocean floor carry 99 percent of all transoceanic digital communication, which includes phone calls, websites and emails. Without these cables, you would have a hard time FaceTiming with your colleagues in London or emailing family while vacationing in Ireland. Relying on satellites to transmit data 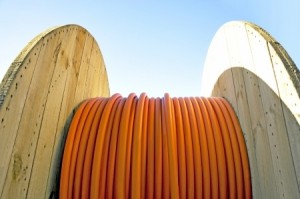 would make communication possible, but it would be incredibly slow compared to the speed that the fiber optic cables afford. In Antarctica – the only continent without a physical cable link to the rest of the world – researchers have a hard time transmitting their work because satellite bandwidth is somewhat unreliable and data transmission is at a premium.

Reinvention of an Old Idea

While fiber optic cabling is a new technology, using cables isn’t a new idea. In the 1850s, a telegram sent from Queen Victoria to President Buchanan via the world’s first transatlantic cable was successfully transmitted in about 17 hours. While the man in charge of the cable – Edward Orange Wildman Whitehouse – fried it by trying to make it faster, the start of transoceanic communication can trace back more than a century and a half.

Installation of modern cables is slow, expensive work, with cables that are hundreds of thousands of miles long and placed as deep in the ocean as Everest is tall. They can be as thick as a soda can, or as slim as a marker. Boats called cable-layers are in charge of 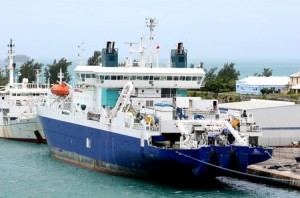 laying the cables safely, but it’s not as simple as dropping a line into the sea. Cable-layers must ensure that the cables do not interfere ecologically with the ocean, which means cables have to be put down across flat, bare ocean floor, and can’t transverse coral reefs or sunken ships. The installation of one cable across one ocean can cost hundreds of millions of dollars.

Making things even more expensive, the cables are vulnerable. The U.S. government constantly monitors the location of key cables to make sure that other countries aren’t messing with them. Last year, the Russians got a little too close for comfort to cables that help run the economy, government and citizens’ lives in the West. Natural disasters, boat anchors and fishing vessels could also be harmful to the cables. Plus, as you may have heard, sharks have acquired a taste for internet cats and hilarious memes.

The cables that currently cross the oceans are built to last for the next 25 years. As of 2014, there were 285 cables on the ocean floor, 22 of which had not moved to active use. These “dark cables” are lying in wait to be “lit” to help carry data and information from one continent to another. While the amount of data consumption is undoubtedly going to increase in the coming years, these cables are already up to the challenge.