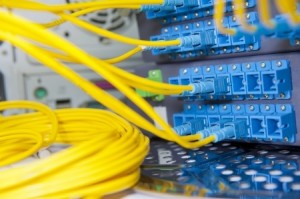 The UK isn’t known for having especially fast broadband speeds. Last month, a group of business leaders in Britain published a study in which they accused the UK government of having a “poverty of ambition” that has caused the country to lag behind other developed nations in the adoption of high speed fiber optic internet. The authors of the study argue that improved broadband speeds would increase productivity in British businesses and allow them to offer greater flexibility to their employees.

Well, the UK government might be suffering from a poverty of ambition, but the nation’s scientists certainly aren’t.

A group of researchers at University College London’s Optical Networks Group (ONG) recently announced that they had developed a new technique that allows them to achieve data transfer rates of up to 1.125 terabits per second using fiber optic cables. That’s roughly 50,000 times faster than the average broadband connection in the UK. To put those transfer speeds in perspective, the researchers explain that they would allow you to download the entire “Game of Thrones” series in seconds.

So How Did They Do It?

The research team at ONG took highly efficient methods of data compression used in Wi-Fi signals and adapted them for use with optical signals. The data was transferred by sending 15 pulses of light at different frequencies simultaneously toward a special receiver capable of quickly processing all that information. The technique would allow them to use existing fiber optic infrastructure to achieve unprecedented transfer speeds.

The researchers say the next step is to test their technique over long distances to assess the effects of signal decay and distortion. It might be a while before we have 1 Tbps transfer speeds in our living rooms, but breakthroughs like this are bringing us closer ever day.